TL;DR: You can configure individual RBAC on keys, secrets, and certificates in Azure Key Vault with RBAC enabled.

Role-Based Access Control has been around for Azure Key Vault a while now, and I have used it for a few deployments. The option for individual Access Control escaped my attention, though. There’s always an opportunity to learn something new in the fast and ever moving cloud. 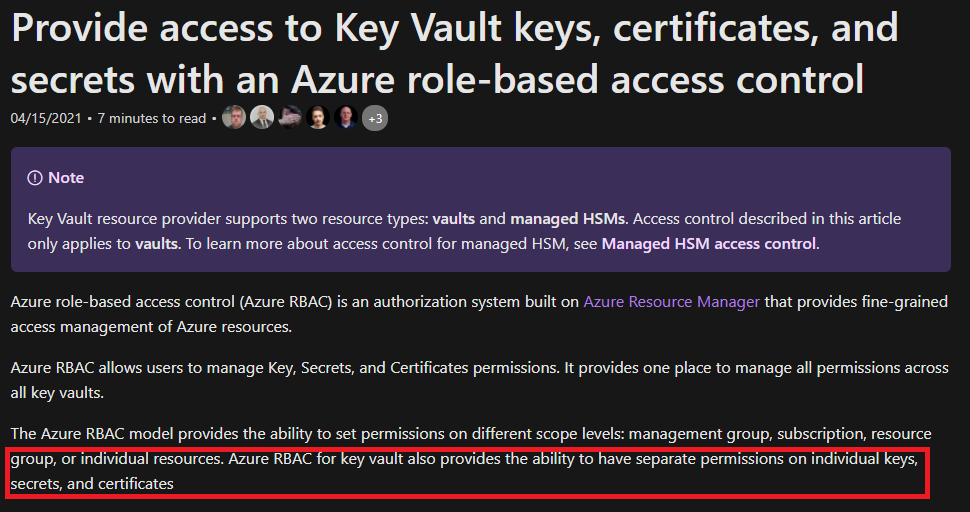 The reason I just recently stumbled upon this functionality, is the extra step when accessing Key Vault secrets:

Notice the Access control option (IAM) option. It made me wonder, and I needed to test it.

Key Vaults cost next to nothing, so you can easily test how this works in your own subscription:

When following the guide you should be able to verify almost full access on the “public” secret, and no permission on the “private” secret. This proves  you can grant individual access on different secrets in the same Key Vault.

Always delete unnecessary resources after testing is done. It is best not to leave clutter in your subscriptions, both because of cost and consistency.

This can open the door for many use cases, but a couple comes to mind.

With Access Policy this is a pain to manage, and to get isolation you need 10 different Key Vaults.

Separation of duties in single vault

Picture 10 different people working in an IT department, with different access levels. Some manage networks, some are developers and need access to app passwords, some need access to VM login credentials.

With Access Policy you would need to logically separate all secrets in different Key Vaults with different policies.

With RBAC you could keep all secrets in one Key Vault, and grant only access to the secrets for each user/group that needs it. Of course this is not always a practical approach, but at least it is possible.

This is not specifically because of individual secrets permissions, but rather a possibility because of RBAC on Key Vaults.

Grant Key Vault Administrator at Root Management Group scope to a specific group. Any members will automatically get access to all Key Vaults in the respective Management Group. Furthermore, this is inherited to all child Management Groups, and all child subscriptions. The role only grants access on Key Vaults, in addition to some insights and support.

Other arguments for logical separation of Key Vaults are still valid, and I am not saying you should put all your eggs in the proverbial single basket, but it could be possible.

Individual permissions seem to also apply on certificates and keys. I have not tested this, but I assume the functionality is equivalent.

Am I just late to the party on this? I think it may have been possible for several months, because of the date on the docs article.

I need to moderate my statements on Key Vault possibilities going forward. Hopefully this reaches someone else that did not realize the possibilities here.

View all posts by torivar

This site uses Akismet to reduce spam. Learn how your comment data is processed.